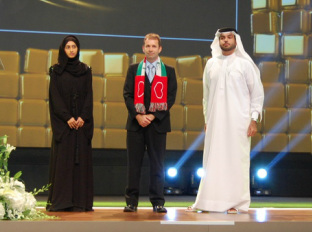 The du Social Media Awards 2012 celebrate the country’s most innovative social media users. Entrants into the Awards will be recognised and rewarded for their positive social media presence; they will promote patriotism and encourage a strong community spirit within the UAE’s society. “The nature of the submissions that we received for the du Social Media Awards reflects the UAE’s people high levels of creativity and innovation, and the willingness of each and every one of the nation’s residents to use social media to positively impact our community,” said Ahmad Bin Byat, Chairman, du. “We would like to thank the judging panel for volunteering, and for devoting their expertise to evaluate the submissions, and wish good luck to all of the shortlisted candidates.”

Best Blog/Blogger - Individual/group of writers making the best use of Social Media to write content that contains meaningful messages for the community, or promoting community-related initiatives.

What the judges said about finalist Peter Waters for his Abu Dhabi Daily Photograph Blog
"Using a thought-provoking image each day, this photoblog both promotes the UAE and challenges common misconceptions and stereotypes about the country and the Arab world. Realizing that modern audiences respond better to visual content than text, the photoblog published 740 photos in four years. It innovatively uses these photos for fundraising, through charity sales of UAE-themed photo screensaver CDs. It has benefited Haiti earthquake survivors, among others. Rather than exclusively using the “Big 3” social media sites, it uses additional sites like Blurb.com and TripWow. The blog receives visitors from 145 countries, demonstrating how it has captured the imaginations of a global audience".